A note from Peter Rowlands 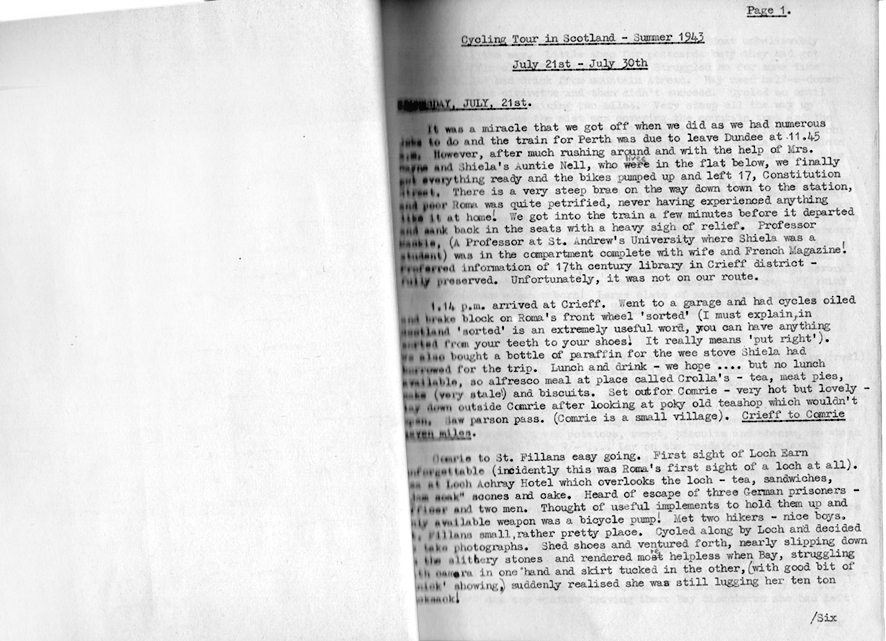 Page 1 of the diary

Well, I didn’t really – edit the diary, I mean. It wasn’t written in my style, but why should it have been? I would have probably used more commas and fewer dashes if I’d been writing it. I would have split up a few sentences instead of running them on. But who am I to override these authentic voices from the past?

Therefore I haven’t interfered with the “diary-esqe” style; I’ve merely tidied it up here and there, and tried to remove inclarities. Many sentences still lack verbs and definite articles, and I’ve also kept in the full points after initials (eg C.M.P., which meant Corps of Mililtary Police). They seem to reflect the style of the time. And it’s still sprinkled with expressions that seem quaint to us now, having long since disappeared from use.

I believe the diary itself was written jointly by my mother Roma and Shiela. From what few clues there are, Shiela certainly wrote some parts – probably quite a lot of it. She describes various scenes from her own perspective, and tends to include Scottish expressions that might not have come naturally to Roma.

The introductory pages of this mini-web site are written in a rather different style. They feature extracts from letters written by Roma in which she talks about the trip, and they are presented more or less “as is”.

The original handwritten diary, which is presumed lost, was typed up in Cambridge by a friend of Roma’s called Gladys. She made a pretty decent job of it, though she evidently didn’t know how to type exclamation marks. Typwriters didn’t have an exclamation mark key; you had to type a full stop, then backspace and type an apostrophe over it. This was vertical (ie “non-smart”), so the effect was reasonably convincing. Anyway, someone – presumably Roma – added a plethora of exclamation marks in ink or pencil. I’ve kept a lot of them in, but I have to admit I’ve dropped a few where they seemed to be getting a bit overwhelming.

My copy looks like the top copy. It’s typed on very thin paper, which apparently allowed at least two carbon copies to be made at the same time as the original. (There was no photocopying then in the way we understand it now.) I don’t know if Shiela ever had a typed copy, but I’d like to think she did. My copy is stapled between rough-cut cardboard covers, and Roma’s father Arthur wrote the title on it in an elegant cursive script. It took until October of 1943 for my mother to organise all this and send the diary, with great fanfare, to my father, who was then in North Africa, but was about to embark with one of the waves of Allies joining the campaign in Italy.

The pictures on this site

Just ten black and white pictures survive from the trip, “enlarged” (by the standards of the time) to 6in by 4in. In other words, they’re not very big! I’ve included all of them in the body of the text, then to brighten up the pages I’ve searched out modern-day photographs of some of the locations, which (in desktop view) are in the right-hand margin. These were nearly all found on Wikimedia Commons, a wonderful resource.

I’d like to thank Shiela’s present-day family for fleshing out the limited knowledge I have of who Shiela was and how she and Roma became friends, despite living four hundred miles apart. I must also thank the man who looks after the Loch Lochy Youth Hostel for confirming my assumptions about the place.

What did you think?

I’d love to hear your thoughts on the Scottish holiday diary. Please get in touch in whatever way suits you best