The challenge of getting noticed

How do self-published authors sell their books? The answer, in most cases, is through a combination of hard work and hard cash (the latter being for required for ongoing advertising and promotion). 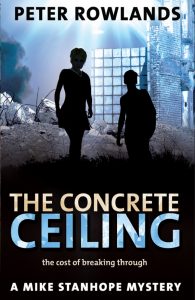 In The Concrete Ceiling, the latest mystery in the Mike Stanhope series (out now!), Mike decides that if he focuses on the cash angle he may be able to shortcut the process. He spends a lot more than he should to promote his own book; but instead of ramping up sales, he quickly finds himself in all kinds of trouble.

In a way, The Concrete Ceiling is a mirror on itself – an offbeat look at the lengths writers of books like this need to go to in their efforts to find readers. And this means that in some respects it’s the most satisfying book I’ve written so far.

I’m relieved to say I’ve never faced the kinds of problem Mike encounters here, but like him, I’ve come to realise that getting traction for self-published books really is hard. I feel for him in his frustration, and I’ve enjoyed showing the world what it can be like. As he’s all too aware, it doesn’t matter how good your book is; people won’t read it if they don’t know about it – and putting it in front of enough readers to make a real impact is challenging. Very challenging.

Don’t worry; at heart Concrete Ceiling is a mystery thriller, not an essay on the trials of getting your book to market! It’s a breathless ride as Mike struggles to understand what he’s unleashed, and at the same time attempts to straighten out his tangled love life. His girlfriend is half-way across the world (and seems happy to keep it that way), but the new woman he’s fallen for is heading into a relationship with someone else. He has a lot to contend with.

The plot has some sudden swerves that may initially surprise you, but lead unerringly back to the beginning. Early readers have told me it’s the fastest-moving episode yet in the Mike Stanhope series.

All that being said, the underlying theme did give me the chance to air some of the issues that plague most self-published authors. A lot of those authors probably wish, like Mike, that they could simply dip into their pockets, spend as much money as they could possibly afford, and boost their book into the mainstream. I certainly do! But I sense that it would be an enormous gamble, and in any case I’m not sure where or how I would place my money. Hopefully not as injudiciously as Mike does; but then, he’s just plain unlucky.

This could run and run.
.