You are here: home » deficit of diligence » reading groups - deficit

I have tried to be objective in formulating these topics, and have deliberately posed probing questions about the structure and content of the story.

I’d like to think my story withstands most of these challenges! But I suppose the whole point of the questions is to open the debate.

The author makes occasional attempts to render the Geordie accent in direct speech, but says in his Author’s Note that he thinks excessive use would be patronising.

Mike, the leading character, gets into hot water after publishing a news article based on privileged information.

Mike’s girlfriend Ashley is very quick to believe he has been unfaithful, even though she has no special reason to trust Andrea, the person who reports this to her.

There are various coincidences in the plot. Mike spots the girl in the ancient film. He sees both ex-gangster Bladen and would-be beneficiary Philip in a single photograph taken at the racecourse. Howard Salmon lives in the same London mansion block as someone Mike knows. Accountant Nick happens to work at the very accountancy firm started by the partner of Elizabeth, who bequeathed Mike the house.

“Everyman” Mike come up against some fairly nasty people in the course of what initially appears to be a low-key business assignment.

At the end of the plot, Mike is apparently prepared to forfeit hundreds of thousands of pounds of his legacy in order to achieve an equitable outcome for all concerned, even though legally speaking he could keep it all.

Peter Rowlands adamantly contends that the overall quality of his writing (transparent prose style, maturity of vision, depth of characterisation, lively dialogue) is the equal of many conventionally published books, and that self-published authors are too often sidelined, being considered inferior by definition.

The reading group topics suggested on this page are also available to download in PDF format. 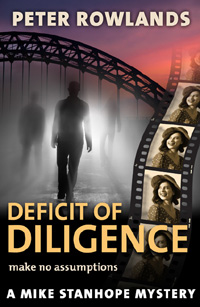