I have tried to be objective in formulating these topics, and have deliberately posed probing questions about the structure and content of the story.

I’d like to think my story withstands most of these challenges! But I suppose the whole point of the questions is to open the debate.

We are not told what the story-within-story is – just that it’s a “concise treatment”.

The pace of the book

Some reviewers have commented that the book starts slowly as we are introduced to Mike Stanhope, but then the action picks up, and overall the pace becomes brisk.

Fundamental to the plot is Mike’s decision to track down a girl he met when he was twelve years old.

Ashley is clearly attracted to Mike from the outset, but is uncertain how to respond to him, or how to reconcile her feelings for him with the fact that she’s engaged to another man. She is proactive in the emerging relationship one minute, hesitant the next.

The entire book (apart from the story-within-story parts) is narrated by the leading character in the first person singular, preventing any opportunity for objective comment about the people in it and what happens to them. Other characters are fleshed out by what they say as much as by what Mike says about them.

There are a number of coincidences in the plot. Apart from the obvious example of the robbers happening to read Mike’s book, there is the coincidence of the real and fictional thieves both fleeing to Queensland (admittedly different parts of it). There is also that of parcels boss Rick Ashton making the same mistake as the robbers in believing that Mike’s book is true.

The reading group topics suggested on this page are also available to download in PDF format. 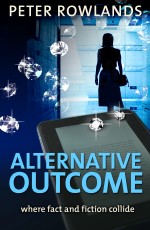