Peter Rowlands hits the ground running with this fast-moving mystery drama, which is set in the logistics world, and also takes a wry look at self-publishing 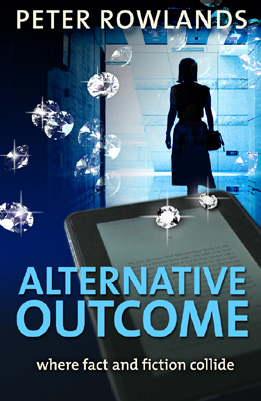 A parcels carrier confronts a cash flow crisis. A regional logistics group strives to extend its national coverage. A haulage company boss gets caught up in people smuggling.

News stories from the transport trade press? No, these are among the plot points of a brand new mystery novel, Alternative Outcome, by long-time transport and logistics journalist and editor Peter Rowlands. It is now available on Amazon Kindle at this link:
http://www.amazon.co.uk/Alternative-Outcome-Peter-Rowlands-ebook/dp/B01CK1XVHK/

The leading character, Mike, is a logistics journalist like Peter himself - but as Peter puts it, “That’s where the similarities end.” He says Mike is much more resourceful than he could ever be, though when the book opens Mike has allowed his commitment to slide somewhat.

In a bid to break away from the daily grind, Mike has self-published his first novel online, unaware that this will trigger a sequence of events in which fact and fiction start to become intertwined. “In a way the whole of Alternative Outcome is a mirror on itself,” Peter says.

Anyone with even a passing knowledge of the logistics world and its press will recognise much of the backdrop to this book. The action ranges through trade shows at home and abroad, transport company interviews and press events. The settings include a rental company, logistics depots and a parcel sortation centre.

The main character struggles to turn out news stories, feature articles and press releases, at the same time chasing down a mystery that has long puzzled him. And the further he probes, the worse the repercussions he brings on himself.

The book’s accessible, transparent prose style brings all this to life, making extensive use of bright, naturalistic dialogue, and the story is populated by vivid and believable characters.

“Alternative Outcome is not just about logistics,” Peter emphasises. “It’s a mystery drama with a romantic thread, and has elements of a thriller too. I’ve aimed to make it a compelling read for anybody, whether they know anything about logistics or not.

“But there’s a strong business background,” he adds, “and the story also raises a few intriguing moral issues.”

Peter Rowlands worked as a freelance journalist in the transport and logistics press for many years, contributing numerous feature articles to publications such as Commercial Motor and Motor Transport, as well as submitting many non-attributed press releases on behalf of suppliers. In the 1990s he edited Distribution Business magazine, then in recent years he edited and co-owned Fulfilment & e.logistics, which merged with eDelivery in 2015.

Peter’s first published novel, Alternative Outcome, is available now as an e-book on Amazon Kindle, and will later be released in other formats. Sample chapters, further information and a link to Peter’s Amazon Kindle page can be found on his web site, www.peterrowlands.com.